Editor’s note: Over the past decade, China has made great accomplishments while navigating through a tumultuous global environment. As the 20th Communist Party of China National Congress approaches, CGTN First Voice has prepared a 10-part series titled “The China Path: A Panoramic Decoding” to take you through the landmarks and watershed events over the past ten years and decode the secret of China’s development. This is part five of the series, focusing on China’s rich and long-standing culture’s contribution to the success of its governance.

In recent years, trainees from Cuba, Mexico, Ethiopia and many other countries studying at the Party School of the CPC Central Committee (China National Academy of Governance) paid visits to the Forbidden City, Beijing Temple of Confucius and Imperial College to learn more about Chinese history.

They were impressed by Chinese moral and spiritual values, as well as the nation’s perspective on harmony. They took careful note of China’s achievements in national governance and its people-centered philosophy to build a community with a shared future for humanity. They also reflected on Confucian philosophy taking root in the Chinese people. Numerous principles of ancient governance philosophies have merged in the process of the country’s modern development.
Traditional Chinese culture is the “root” and “soul” of China, representing the strongest cultural soft power and holding copious wisdom for national governance. The 5,000-year history of Chinese civilization has nourished the Chinese characteristics. This is crucial to the success of the socialism with Chinese characteristics.

When officials from other countries glimpse into the stories of China’s effective governance in the new era and into the extraordinary traditional Chinese culture, can they discover the secret to

How to govern such a big country? Chinese President Xi Jinping said that to govern a big country with so many people and so complex national conditions, the leaders of China must be aware of China’s reality and aspirations of its people, treating their responsibilities with utmost care as if they are walking on thin ice or standing on the edge of an abyss, and understand that “governing a big country is like cooking a small fish.” Leaders should neither overdo things nor slacken in their efforts. This philosophy is reflected in its Five-Year Plan for developments goals. The guiding principle, “seeking progress amid stability” for economic development, has been repeatedly raised by the central government.

Members of the Communist Party of China are loyal inheritors of traditional Chinese ideals – “when the way of virtue and justice prevailed, the whole world was one community,” “rule by virtue, not punishment,” “the law does not discriminate in favor of the rich and powerful,” “the moral injunctions of fidelity to one’s parents and brothers and to the monarch and friends, and the sense of propriety, justice, integrity and honor,” “appoint the virtuous and the capable,” etc. – are all governance ideas worth studying. 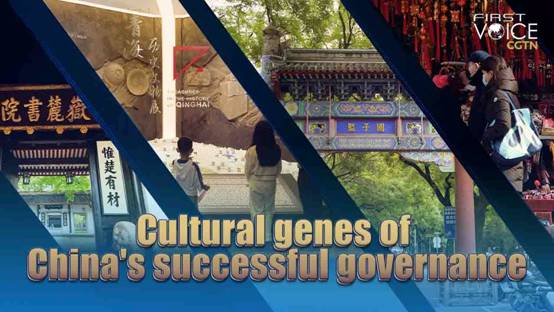 Innovative symbols of traditional Chinese culture
The Chinese have achieved the first Centenary Goal and are embarking on a new journey towards the second Centenary Goal. So it’s essential to improve China’s model and system of national governance.

Plants with strong roots grow well, and efforts with the right focus will ensure success. Representing the fundamental interests of the broadest masses remains the fundamental mission of China’s national governance. Putting people first stands firm as a crucial component of Xi Jinping’s Thought on Socialism with Chinese Characteristics for a New Era and the Party’s governance.

There are innovative representations of people-centerd ideals advocated throughout China’s history, e.g. “the people are the most important element in a country, and the ruler is the lightest,” “politics should serve the people,” “a nation is based on its people; society is also established for the benefit of its people.”

The Chinese nation, throughout its rich history, has sought to eradicate poverty and have people’s basic needs met. Since the very day of its founding, the Party has made seeking happiness for the Chinese people and rejuvenation for the Chinese nation as its aspiration and mission over the past hundred years.

After the 18th National Congress of the CPC, the central government said that poverty is not socialism, and follows the principle of “leaving no single poor area or single poor person behind” under the targeted poverty alleviation strategy. The number of people lifted out of poverty each year has averaged at over 10 million, almost equal to the population of a medium-sized country. In 2021, President Xi declared an achievement of the goal to build a moderately prosperous society in all respects, and to exterminate extreme poverty in the country.

The CPC will strive to realize, safeguard and expand the fundamental interests of the people, resolve the imbalances and inadequacies in development that are of great concern to the people, by ensuring whole-process democracy, safeguarding social fairness and justice, and working towards well-rounded human development and common prosperity for all.

We are not alone on the Great Way

No country can tackle the challenges faced by humanity alone. The COVID-19 pandemic speaks volumes, since people worldwide are living in an interconnected global village with a common stake. All countries are closely connected and we share a common future. In the face of the pandemic, the Chinese government has put people’s life and health first and effectively protected them.

The CPC combines patriotism and internationalism in its work and sees the well-being of the Chinese as closely tied to world affairs. The Chinese government works with all peace-loving countries to uphold the shared human values of peace, development, equity, justice, democracy and freedom, build a community with a shared future for humanity, and carry out win-win cooperation. 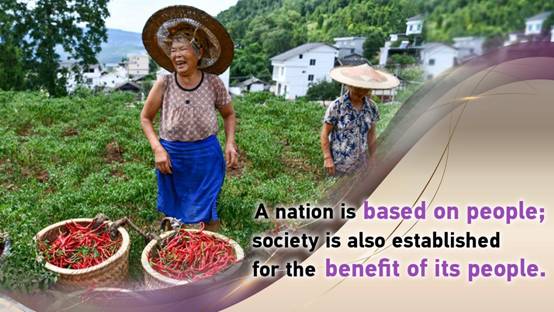 China espouses harmony in diversity. Its socialist system, theory, institutions and culture have opened up a new path to modernization for developing countries, offering a new option for countries and nations who wish to both accelerate development and to maintain independence. China’s practice shows the world that the Western model is not the only model for national governance and modernization. Every country can choose their own path of development. China will not import other countries’ models, nor will it export or ask other countries to duplicate its style. The 18th National Congress of the CPC shows that the inheritance and innovation of traditional culture is the answer to China’s success in national governance.

(Contributed by Dong Qing, Director of the Department of International Cooperation at the Party School of the CPC Central Committee (China National Academy of Governance). Link to publication on CGTN Opinions: https://news.cgtn.com/news/2022-09-30/Cultural-genes-of-China-s-successful-governance-1dJUwgWLN4s/index.html